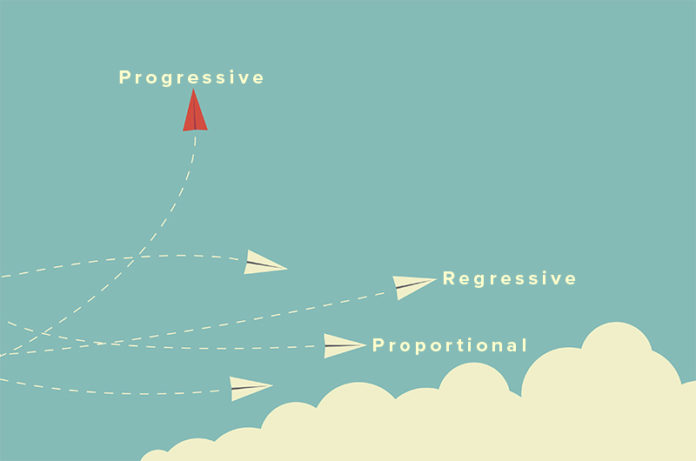 Taxes are, for many, inevitable. As the adage goes, “there are only two certainties in life; death and taxes,” (although this has mutated into something of a metaphor for worn-out maxims).  However, as we discussed in a previous article, for the very wealthy, taxes are not so inevitable. Depending on your view, you may find the next question profoundly strange: who wouldn’t want to pay taxes?

Some members of society feel exploited by their government’s taxation system. Who wants to be hoodwinked out of a sizeable percentage of money every month? With this in mind, today we look at some of the various forms of taxation that are, in some form or another, employed in countries around the world. We may just find the source of ire of our morose taxpayers.

We’ll use income tax as an example of how progressive tax is employed. Progressive tax describes a system in which tax is paid incrementally as wages increase; you earn more, you pay more. A regressive tax, on the other hand, does the exact opposite; as income goes up, the tax bill comes down.

Cigarettes are often used as an example of a regressive tax. Those who smoke the most pay the highest amount of tax (this is typically higher in deprived areas of England according to Cancer Research UK). Another example would be the TV license, not a tax per se, but it uses a similar structure as it funds public television. A TV licence costs the same for each household, regardless of how many TVs are in the house (and the size of the house). Now take into account that the wealthiest 10% of households own 50% of the UK’s household wealth; in comparison, 90% of households pay a disproportionate amount of their household wealth for a TV license. The bottom 90% pays a disproportionately large amount in comparison with the top 10%.

Sometimes called a flat tax, proportional tax works by taking the same percentage from all taxpayers. The government would take, for example, 10% for each taxpayer regardless of their income. Where most of the tax money comes from in a proportional system depends on how the income of the country is distributed. Here’s a straightforward example to illustrate what proportional tax would look like:

There are twenty people in our hypothetical nation; they are divided into three groups:

Group Two consists of seven people, and they each earn £40,000 a year.

Group Three consists of three people, and they each earn £60,000 a year.

Our proportional tax rate is 10% of income.

The final tax totals are:

Is this fair? The largest group (One) pay less than the middle group (Two) but more than top earners (Three). On the other hand, the largest group (One), who are more likely to use the public services taxes pay for, pay significantly less than Group Two which is only marginally smaller. As you can see, creating a fair tax system with an extremely limited number of fictional taxpayers is not easy. You could also factor in the costs paid through an indirect tax on things like VAT which could change the picture entirely. Would we then decide to charge VAT progressively so top earners pay a higher VAT percentage?

Depending on your view, taxation may seem particularly unfair. However, as former US Supreme Court Justice Oliver Wendell Holmes said, “taxes are what we pay for civilised society,” and if civilised society has been particularly beneficial for you, why shouldn’t you give back more? That goes for every form of tax; it may seem draconian to charge a higher VAT for those who earn more, but some may argue that earning more money is another direct benefit of being a citizen.

What is AAT Series: Where to Study an AAT Qualification

Gender Prejudice in Finance and Accounting