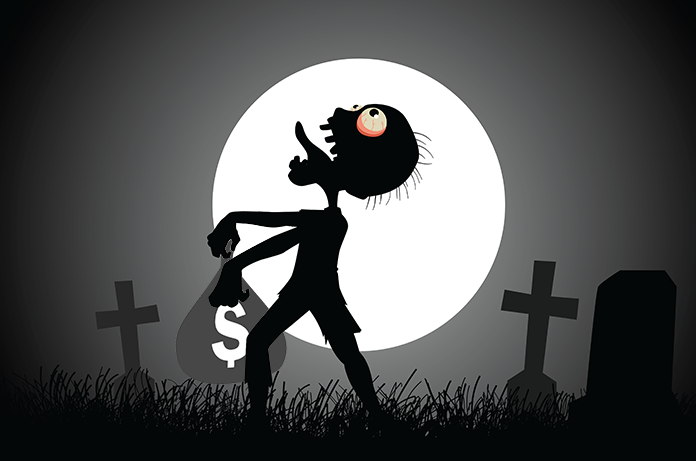 Have you ever felt hungry for brains? How about a need to mindlessly destroy along with a profound dissociation with reality? If you answered yes to all of these questions, you might be a member of the living dead, or you could be a zombie bank. These financial institutions have a seemingly unquenchable thirst for cash and a dissociation with the rules governing financial capitalism. Today we break down what zombie banks are and what effect they have on economies.

What Are Zombie Banks?

Zombie banks are much like their George A Romero counterparts – insatiably hungry, yet slowly decaying. Zombie banks are insolvent financial institutions that are kept alive by either direct or indirect government support, and if there’s enough of them, they’ll negatively affect the entire market. The B-movie equivalent would be if a government produced lab-grown brains to keep the zombie population (that they created) satiated in return for workforce statistics (“Our workforce is 20 billion strong! And they never die!”).

Solvency relates to a business’ ability to pay their long-term debts: “To be considered solvent, the value of an entity’s assets, whether in reference to a company or an individual, must be greater than the sum of its debt obligations.” For banks this can be confusing as their assets include the loans they create, but if the loans default they become a drain on the company’s assets.

Zombie banks are effectively a sign that an economy’s banking system is stagnating. Instead of letting the natural order of capitalism take its course and allowing the failing financial institutions to die, the government subsidies the debt-burdened banks in a bid to keep the financial market stable. The combined failure of regulation – which allows financial institutions to get to the point of insolvency – and a government’s lack of commitment to free market economics – if a bank can’t fail, there’s no risk – can result in zombie banks.

This zombie metaphor really has legs; the danger in allowing such banks to continue is that they damage the profits of healthy companies by devaluing the currency – injecting money into failing corps(e) means each pound is worth less. This results in a period of stagnation in which healthy banks (that prepared for the apocalypse with food, body armour and a contingency plan for loan defaults) have no real incentive to innovate because the very presence of zombie banks means that their healthy profits are suddenly less valuable: “The counterpart of the congestion created by the zombies is a reduction of the profits for healthy firms, which discourages their entry and investment. In this context, even solvent banks do not find good lending opportunities.” The double whammy comes from trapping investment money inside the failing institutions, which could be used for bolstering healthy companies or “supporting economic recovery”.

The study “Zombie Lending and Depressed Restructuring in Japan” offers a detailed insight into the context, events and fallout of Japan’s hungry zombie banking sector of the 1990s. In short, the study exposed how Japanese banks were given room by lax regulators to engaging in sham loan restructuring that kept credit flowing to insolvent borrowers (those who they knew were unable to cover the cost of the loan with the assets they had). Rather than solving the fundamental infection, “in Japan the political and regulatory response was to deny the existence of any problems and delay any serious reforms or restructuring of the banks.” In the long term, subsidies of this kind end up costing the economy huge amounts in devaluation of currency and stagnation of business.

Interested in working in finance? AAT qualifications offer routes to various roles in the finance industry. Get in touch with our course advisors today to find out where an AAT qualification can take you.

Six Skills You Need to Become an Accountant