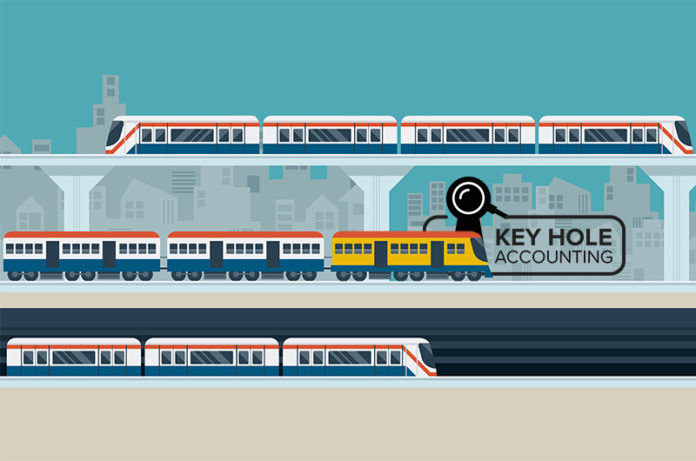 Today we focus Key Hole Accounting’s laser targeted financial critique rays on a topic that is likely to affect students and workers alike: rail travel in the UK.

A new year, a new price hike from under-fire transport secretary, Chris Grayling. News of the recent 3.6% average increase in rail fares has left commuters feeling understandably incensed. As website Money Saving Expert reported: “In August [2017] it was confirmed that season tickets in England, which are regulated fares [directly controlled by the government], will rise by 3.6%, in line with July’s rate of inflation.” This coincides with real-wages still lagging behind inflation, resulting in more strain on consumer wallets. Ouch.

So, What’s the Damage?

Depending on your journey, the cost of your season ticket may very well have increased by a substantial amount; “on the country’s busiest routes season tickets are rising by more than £100 [per year],” reported the Telegraph.

For many commuters, the financial burden of travelling by train is becoming harder to swallow. An annual season ticket from Birmingham to London now sets passengers back a whopping £10,567; by comparison, the Telegraph reported the average mortgage cost in 2016 to be £11,591 over the course of a year (£965.93 per month). The Birmingham/London route fares have risen above the inflation rate since 2010 when the price was a mere £8,028. The Guardian reported comments from Andy McDonald, shadow transport secretary, regarding this latest price jump: “fares had increased at a ‘truly staggering’ rate, and had risen three times more quickly than wages since the start of the first David Cameron government.”

Any More Cause for Concern?

Indeed, the woes do not end at the ticket hall. As well as being easily the most expensive country in Europe to travel by train, it appears the private companies managing certain areas and routes in the UK are heaping more financial burden on not just the commuting public but potentially non-commuting taxpayers as well.

A brand new taxpayer-backed public-private partnership is set to replace the East Coast Rail franchise controlled by Virgin Trains East Coast (90% owned by Stagecoach, 10% by Virgin) three years before the proposed franchise contract end date. But what caused this volte-face? Essentially, Virgin Trains East Coast (Vtec) appears to have overbid substantially for the contract that was expected to run from 2015 to 2023. The pledge of £3.3bn to run the service was to be paid to the government over the course of the eight years. However, after admitting profitability of the franchise did not materialise, the company has decided it wants out. It will now be replaced with a vaguely named public-private partnership which will help Vtec avoid paying the full cost. It’s not a bailout, at least not in the traditional sense.

But Stagecoach (90% stakeholders of Vtec) lost out financially, right? Hardly; share prices for the company went up after the government’s public-private announcement, showing that financial losses are the dead donkey of private rail companies.

More good news for Stagecoach (and subsequently bad news for the taxpayer): the market for rail franchising is so uncompetitive, Stagecoach is almost certain to bid and win another rail contract in the not-too-distant future. Watch this space.

Interested in investigating the numbers behind the big deals? A role in forensic accounting might be just the career to satisfy your inquisitive nature. AAT qualifications are a great place to start when looking to take the first step on your professional journey in accounting; contact the Aspiring Accountants team today for more information on where AAT can take you.

For weekly updates on everything accounting, subscribe to our Aspiring Accountants newsletter.

What is AAT Series: Why AAT?

The Top 5 Skills Every Accountant Has…